Between 70- 90% percent of acquisitions fail.

But while the M&A failure rate is high, the right approach can help you fast-track your organization’s growth.

That’s why asked the experts.

In just 14 years, the IT services company, Aldridge has grown from a startup with 10 employees to a thriving company with 115 employees, $24 million in revenue, and 18% profits. The company's CEO, Patrick Wiley, and President, Bryan Gregory, largely attribute their success to a growth strategy that's focused on mergers and acquisitions. In other words, they've sought to grow their business by acquiring more companies, more clients, and more sales.

This strategy, however, is not foolproof. In their first years of aggressively purchasing other businesses, Aldridge's revenue increased steadily, but at the same time, the company's profits were steadily decreasing. After taking a close look at their business and their mergers and acquisitions strategy, the two business leaders managed to pivot their way to a company with healthy growth on both the top and bottom lines.

Read on to learn more about Wiley and Gregory's secrets to successful growth through mergers and acquisitions.

🎧  Looking for more leadership and business advice? Listen to the full episode (& many more) here!

1. Remember You Can't Simply Sell (or Grow) Your Way to Profits

At the helm of Aldridge, Wiley and Gregory decided to focus on growth through mergers and acquisitions strategy.

As Aldridge added more clients and took over more market share, their revenue kept increasing. Despite the top-line growth, they noticed that their profits were suffering and shrinking consistently.

Wiley said, "It continued that way until really the end of 2016 headed into 2017 when we said, 'Oh, gosh, I don't know this is not a winning strategy,' We're working harder and everybody's putting in more effort, we're bringing less to the bottom line, and we're able to invest less and make it better."

That's when they asked themselves what they had done wrong.

Noticing the consistent downward trend of their bottom line was what tipped off Gregory and Wiley that something in their business and growth model wasn't working, and they knew they needed to get to the bottom of the problem and address it right away.

When they started sniffing around the data (both the numbers and the "fun scale" as they describe it), the problem they found was that they didn't really know their business, its core competency, and its core value. So, the mergers and acquisitions they were pursuing weren't necessarily the right ones for them.

"We were focused on growing [the] top line, growing market share," said Wiley. "We would [consider or even buy] anything that looked and smelled like an IT company, not necessarily providing the same service in the same business to the same target client profile that we did, and I think that probably is the best way I could say that sums up the . . . mistake that we made."

As they looked into their business to determine which of their revenue streams (client types or job types) were the most profitable and the most enjoyable to work with, they found that about 80% of their time was going toward only about 30% of their revenue. Their energy and focus weren't going toward their strongest clients, and they were losing some of those clients as a result.

This meant that they needed to drop 17-18% of their business that didn't fit the profile for strong revenue and enjoyable work, and that's what they started doing right away.

"What's the biggest mistake that we made? It was making the assumption that our people, our clients, our employees, [and] our suppliers would all 100% get behind what we're thinking," said Wiley. "The truth is human beings are naturally opposed to change, and it takes a while to convince. It takes proof and demonstration that this is the way."

In addition to refocusing on their company's core function when considering mergers and acquisitions, they also changed the way they were shopping for businesses to acquire. Not only did they focus on companies that matched their new-found identity in the IT service industry, they also started looking for businesses that were a better match culturally speaking.

Prior to their strategy reassessment in 2017, they mainly targeted struggling companies because those, in their minds, represented better deals – they weren't as expensive to purchase. These businesses, however, largely had workplace cultures that did not place a strong value on accountability, which meant it was difficult for these employees to transition into a new culture that would place a strong emphasis on process and accountability to their superiors, their responsibilities, and their clients.

Listen to the full episode! 🎧

After revising their strategy, they began to focus on targeting more successful companies – despite the higher price tags – because the transition into the newer culture is simpler for the people involved in those businesses. They also started being more up-front with the people about the changes that would occur.

In addition to merging cultures with transparency, they've also implemented more intentional processes and training to improve the employees' ability to assimilate into the new workplace culture.

With cultural flux being a part of the very nature of mergers and acquisitions, this growth strategy hasn't made navigating The Great Resignation any easier on Aldridge, and Wiley and Gregory admit they're no experts and are working hard to make Aldridge the kind of place where employees want to work.

Read More: Invest In Your Middle Managers: They Can Make or Break Your Business

They've distributed surveys to their employees to learn more about what makes their workplace great and what things in their workplace could improve (from the employees' perspective). One resounding response has been management training. The quality and behavior of management are largely responsible for the workplace atmosphere and culture. So, Aldridge has begun providing their managers with professional training in leadership and management.

Most managers become managers because they are promoted for excelling at a technical task in a job, but this skill does not always translate to a natural ability to manage people well. So, they're working to improve their workplace and reduce turnover by improving management at all levels.

They're also investing in employee development and career training. Their company has two lower-level entry points, and they focus on training employees from there so that they can promote from within. However, they provide this career development and the time to complete it to employees whether they plan to stay with Aldridge or not. Career development and education are additional benefits that employees can enjoy while working for Aldridge. So, they not only improve the company but themselves throughout their careers. 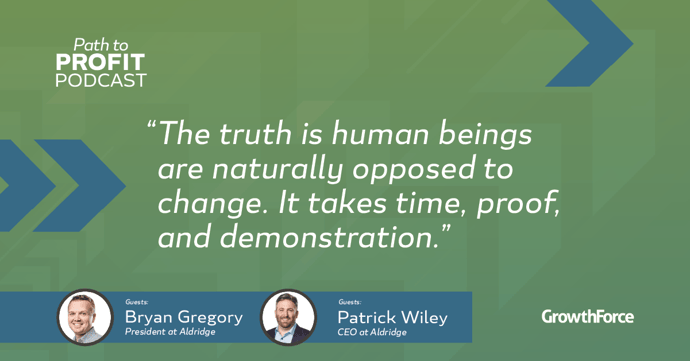 What Every Business Leader Should Consider to Be Successful Today

Even if you aren't looking to grow your company through mergers and acquisitions, Bryan Gregory and Patrick Wiley of Aldridge had two pieces of advice that they believe are critical to business success in today's climate.

Firstly, they discussed the importance of being flexible with remote work and hybrid office models that allow employees to work and serve clients from their homes. For Aldridge, the push to remote work that occurred during the pandemic actually increased their productivity, and now they take about 90% of their meetings remotely over video calls.

According to Gregory, the key to their remote work model success has been that meeting online through video chats has become part of the norm. "We have a culture of, if you're joining a meeting, you turn your camera on. You engage. You show up to work on camera just like you show up to work in the office."

Additionally, they've accepted and acknowledged the importance of embracing the nature of working from home. Gregory said, "People have lives at home. The dog's going to bark in the background. A baby's going to cry. You can't get wound up about that. It's part of the gig."

At Aldridge, they look at the glimpse into people's lives at home as a part of the culture of remote work and a way to get to know their employees a little bit better than they would if they were just working in the office.

Keeping Up With Cybersecurity

The second thing that needs to be on every modern business owner's mind is cybersecurity because cybercrime is a constant threat that can be incredibly costly both monetarily and to your reputation – not to mention the fallout that could result if your clients' personal information were to be compromised.

Cybersecurity is becoming an increasingly larger part of what Aldridge does for its clients. As Gregory put it, "It's one of those things that, unfortunately, is not a destination. We're never going to be able to say we finally made it more secure. It's keeping up with it. The bad guys that are out there are going to be constantly evolving their tactics."

They recommend, at the most basic level, that every business should be implementing a two-pronged approach to cybersecurity using both multifactor authentication and ongoing employee training. When it comes to cybersecurity risks, phishing is one of the biggest threats to businesses. If employees haven't been trained about phishing, how to recognize the signs of phishing, or how to protect themselves from phishing, then the entire business is at risk.

An employee could click a link in a phishing email that appears completely legitimate, enter their personal information, and then – without two-factor authentication in place – a cybercriminal could sign in and gain access to that employee's accounts. This opens up opportunities for personal information to be stolen, in addition to the potential for the criminal to impersonate the employee.

While businesses should be doing everything they can to safeguard their business, their employees, and their clients from online threats, multifactor authentication and regular employee training are the first essential steps. To keep your growing business safe from cybercriminals now and into the future.