3 Phases of Making a Business Profitable 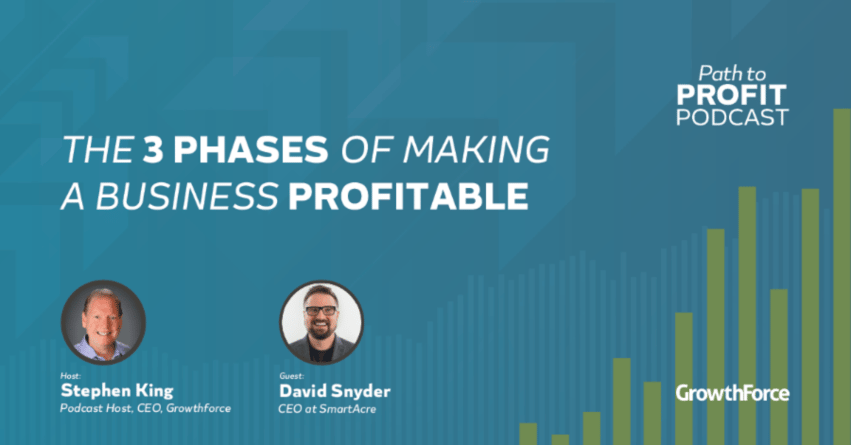 Every business owner knows by now there is no “secret formula” to building a successful and profitable organization.

However, there are certain steps to take to get on the right track.

In this recent episode of Path to Profit, GrowthForce Founder and CEO, Stephen King talked with the CEO of SmartAcre, David Snyder about how he started with the five-perfect-profits company as an employee a decade ago and, in 2019, he took the company's reins after tragedy struck the C-suite and managed to grow the company to 29% profits by last year.

During their conversation, King and Snyder discussed how Snyder managed to create stability after taking charge during a time of tragedy in the company after the previous CEO had been killed in a car accident.

While working toward stability, Snyder also focused on three steps to increasing profits and transforming SmartAcre into one of the best places to work.

The 3 Steps to Business Profits, According to David Snyder, CEO of SmartAcre

1. It's All About Fostering Trust: Create a People-Centered Workplace Culture and Core Values

"The first phase was really around stabilizing the business," said Snyder. "We needed to have stability here. There was uncertainty [like], 'Oh my God, what's going to happen?' So, I needed to make sure that I trusted the people inside the walls and outside, our outside partners, our outside finance team, our outside, accounting, and just really trust the people that were working with me."

For Snyder, workplace culture and core values start with trust: both trusting one's employees and one's employees having trust in their leadership. Referring to the day he took over as CEO of the company, Snyder said, "I had to stand up in front of everybody and tell them that things are going to be okay. We're going to do this together."

Snyder began to foster trust between himself and his employees by recognizing that the company had hired smart people for a reason and understanding that this meant he did not need to micromanage. "You need to trust the people in your business," Snyder said. "You need to trust the people that you're working with . . . That's why I'm not a micromanager. I am not somebody that stands over someone's shoulder. I'm like you're here for a reason. You're a smart person."

While focusing on trust, Snyder said that the first thing he recognized as a problem was that the company had fragmented core values, and the core values that they did have weren't that great. So, he started overhauling their mission statement and core values because he wanted to create an amazing workplace and foster an environment where the people cared about each other and their clients.

"Our first core value was we put the client first," said Snyder. While he emphasized that they love and need their clients, Snyder said he recognized a need to flip that script. "From this moment on," he said, "we're going to put [our] people first and the rest will take care of itself." Snyder said that concept is his secret sauce.

Snyder said that he wishes he would have understood and implemented that concept much earlier in the company because the people are the ones who are putting in their effort. They're the ones who are going to take your business to the next level.

In addition to putting his people first, he also emphasized the importance of the team over the self. So that employees are always thinking about how their actions will affect the rest of the team and how the rest of the team can help them be successful. Snyder said that he's a sports guy, "and if you look at it . . . it's really hard to win when you're by yourself."

Read More: Workplace Culture: What It Is and Why It's Important For Your Business

He also focused on creating a purpose for his employees and accountability for himself with the company's employees by increasing transparency around his management and leadership strategies. He started involving his employees in the higher-level strategies that were occurring in the business by sending out weekly videos to tell his employees what he had been working on that week whether it was their benefits, HR, pay structure, the time-off policy, the clients they were working on, their new business strategy, growth strategy, or services. Snyder said he was honest and transparent every week about the progress they were making together and how much time it might take.

This transparency helps each employee feel ownership in the company, its larger strategies, and its ultimate success. It not only creates a culture of trust and open communication, but it also fosters purpose in each employee's daily roles and responsibilities.

As the pandemic hit, just one year after stepping in as CEO, Snyder also continued to emphasize the importance of connection in the company. He had already put strong weight on connecting at least quarterly with employees to check in regarding their happiness, their jobs, their goals in the company, and what they needed to achieve those goals.

During the pandemic, Snyder moved the company fully remote, and they're still working in a 100% remote model. However, he makes a point to connect with employees with a quarterly all-company meeting. Some employees come in person, while others join over Zoom. During this meeting, Snyder shares the business's progress and goals and also discusses the new goals and benchmarks that are on the horizon. They discuss how roles might shift or what other issues need to be addressed in the business. All employees can take ownership in this meeting and understand the truly integral part they play in the success of the company as a whole.

Additionally, Snyder carries out watercooler pop-ins over Zoom with all of his employees. Each check-in lasts about 15 minutes and occurs once every week or two. These quick meetings help him stay in touch with his employees and keep the lines of communication open and comfortable. Sometimes, the watercooler check-in is highly personal, and other times, it's more business-focused. Either way, these short meetings help to strengthen the culture and bonds within the company.

Although Snyder's company is now hiring nationally and has employees located in seven different states, they still make it a priority to get everyone together. Sometimes, they fly everyone in for the quarterly meeting. They also hold an annual in-person retreat for all employees. This retreat, Snyder, said is all about having fun and fostering trust between the people in his company (whom he refers to as "SmartAcres"). 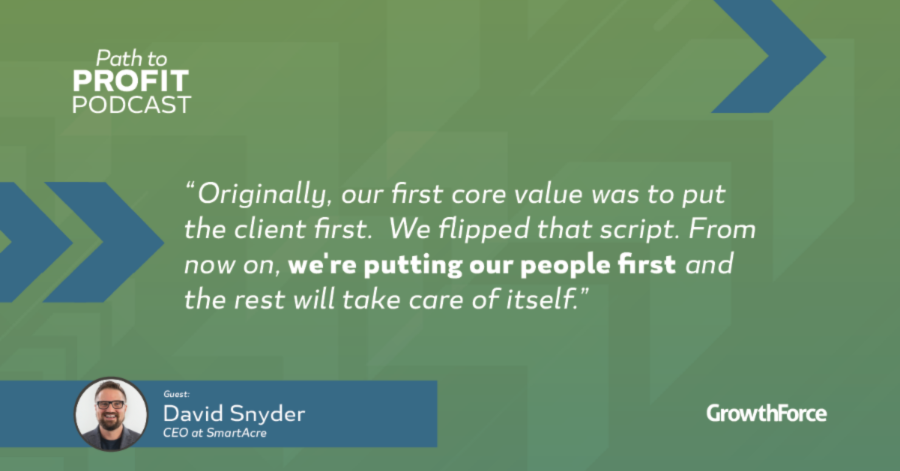 "Our SmartAcres are sometimes meeting each other in person for the first time. They're like touching [and asking] 'Are you real? You are real!' Right, and it's really important to have that in-person time."

Snyder says it's important when building an agenda for this kind of retreat to include plenty of free time so that employees have the flexibility to go off and do their own thing together. "They're not conspiring against you," he said. "Let them go. Let them have fun."

In addition to free time, Snyder also usually schedules an outside speaker to talk about motivation, and he also plans plenty of team-building activities like scavenger hunts and other exercises.

3. Focus on Processes and Measuring/Defining Success

In addition to improving the company's core values and helping to foster strong connections between his employees for improved workplace culture and team mentality, he also focused on streamlining processes to identify and define repeatable or recurring processes in the company.

Snyder didn't just want to build his teams; he also wanted to figure out how they were going to scale up. When he took over the company had 15 people. Today, they have 25. For Snyder, however, it isn't just about scaling numbers of employees but also about scaling the individual employees by reinvesting in them. If you want to grow your business well, you sometimes need to invest in your people, providing them with external training and certifications that can help them do more for your business and step into roles where they can take on additional responsibility and be fully capable of handling it.

Read More: How To Maximize Profit and ROI From Your People

In addition to streamlining processes and making smart investments in his people, Snyder also started a program of measuring success by surveying clients. In a 100% remote workplace model, it's important not only to track productivity but to also keep track of quality. In his business, he said the trick is finding a balance between having employee progress slowed down by the impetus for perfection and driving progress while preserving the quality of service. The client survey has been the perfect measurement tool for tracking quality while using traditional KPIs to measure productivity.

Measuring the Success of Your Business's Human Capital Management Strategy

For example, a successful business retreat and schedule of regular watercooler check-ins might improve employee retention rates, or successfully creating repeatable processes would show up in increased productivity and improved client survey scores.

In order to measure the effectiveness of the strategic changes you implement in your business, you need the tools and processes in place to collect, record, and report your data, and a strong back office can make it all possible. To learn more about setting up your back office to achieve business success and grow your profitability, just like David Snyder did, we welcome you to talk with a GrowthForce representative today.