The Riches Really Are in the Niches: Narrow Your Business Niche 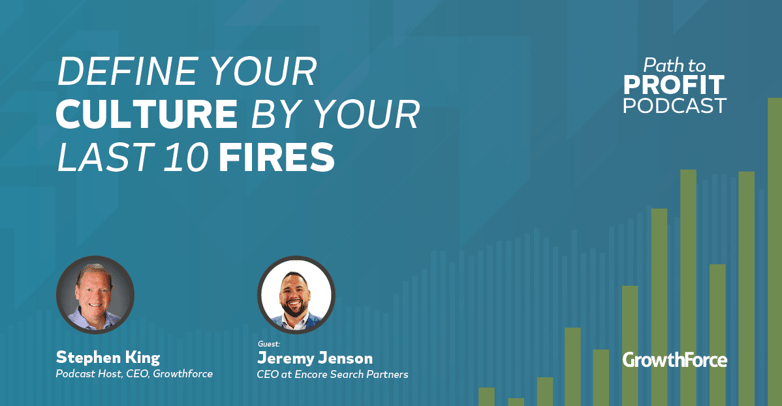 If you ask a business owner who their target market is, and they respond with “everyone”- that really means “no one.”

By now, you’ve heard the phrase “the riches are in the niches”- but does the old adage really ring true?

We consulted the experts to find out. GrowthForce CEO, Stephen King sat down with Jeremy Jenson, CEO at Encore Search Partners, to talk about "niching down" your business for growth, implementing an Entrepreneurial Operating System, the importance of recognizing the value in employees, and using professional employer organizations to constantly keep a bead on the market and hiring competition.

The Riches Are in the Niches: Where Do You Offer the Most Value?

It might seem counterintuitive to imagine that offering fewer services can drive greater profits, but, as Jenson puts it, "The riches are in the niches. It's a wholehearted fact."

To identify your business niche, you need to consider a few different factors such as:

Once you identify a unique selling proposition (USP), focus on it with laser precision. Your business will be differentiated in the marketplace, eliminating competitors, and you'll simultaneously start generating strong profit margins.

You can then drive profits by dedicating resources (time, talent, and money) to what you actually do best, rather than wasting your resources on products or services that directly compete with your industry counterparts or that simply generate weaker returns because they're too expensive to produce.

In addition to finding your business's niche within your industry, you also need to define your workplace culture and core values so that you can develop an operating framework that orients your entire organization around common goals and visions.

Jenson and his partners follow the principles of the Entrepreneurial Operation System (EOS) in their company. Defining processes for everything from financial strategy and human capital management to culture and meetings, this operating system outlines a framework for creating corporate cohesion in addition to setting, communicating, and achieving both short and long-term goals in business.

Read More: Why The Most Successful Businesses Run On Operating Frameworks

The first part of the process was when Jenson's company was defining their business's core values. Rather than directly asking, "What are our core values?," Jenson's business partner asked him to tell him about the previous 10 times he had fired someone from the organization.

In his list of reasons why he had fired people from the business, Jenson and his partners identified their company's six core values around which their operating framework is now oriented:

In his company, a potential hire's industry experience and resume aren't so important; what they really look at is whether or not the person fits the company's core values.

"When you look at our top producers in the organization," Jensons said, "[there's] a young lady from tax consulting...She didn't know anything about recruiting. I got another young lady [who was] the front-of-house manager for a restaurant. I have bartenders, bar managers, retail managers. I've got people that are coming from industries where they had no B2B sales experience, but they adhered to the core values, and they got it, they wanted it, and they had the capacity to do it." 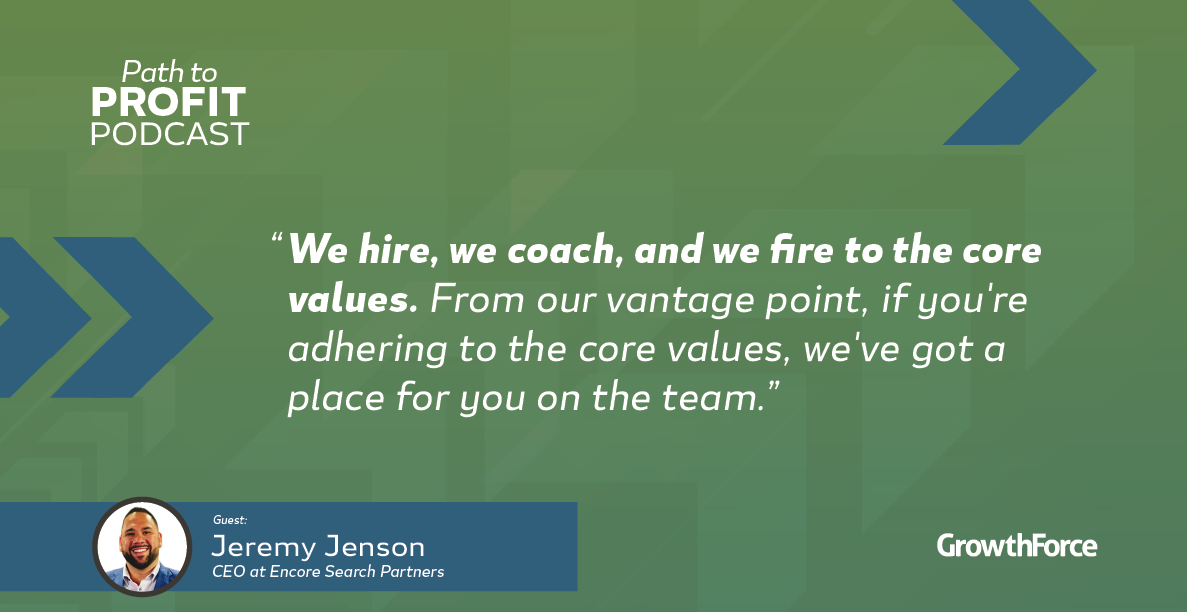 Make the Most of Your People and Reduce Turnover: How Do You Offer Employees Value?

As part of their larger EOS strategy, Jenson and his partners also focus on making the most of their people by placing the right people in the right jobs and implementing a proactive people analyzing program. Whenever selecting a person to fill a specific position, Jenson uses the GWC principle, asking whether the person gets the job, wants the job, and has the capacity to do the job.

They then use scorecards to grade their employees on a weekly or biweekly basis, depending on the person's tenure with the company. Grades are based on whether they're meeting, exceeding, or falling short of expectations when it comes to the company's core values.

They view an employee who consistently exceeds expectations as an incredible employee who is currently being underutilized. These employees, Jenson explained, are potentially at risk of leaving the company because they are not being challenged and likely aren't being compensated for the amazing jobs they're actually doing. They look at people who consistently exceed expectations to better leverage their skill sets and drive-by determining a more appropriate position in the company where they can be challenged, really be utilized to their full capacity, and paid according to what they're actually bringing to the table.

People Are Assets, Not Expenses

At the end of his conversation with King, Jenson told a story about one of his first jobs. At age 25, he was making $75K but wanted to be at least an equal earner to his fiancé, a petroleum engineer who was bringing in a little over $99K. He went into his boss's office, explained how much he's made the company, how he'd helped diversify the company, and how much money he'd saved the company in his position. He asked for a raise to $100K.

His boss recognized the value in Jenson, told him he was an invaluable asset and went to talk with the company's CFO. Two days later, Jenson's boss brought him back into his office and offered him $90K. At 25, a $15K raise was significant, and Jenson accepted it on the spot.

After a couple of days, however, the fact that his current employers didn't give him the amount he asked for simply didn't sit right with him. He felt an element of dissatisfaction and that small amount of dissatisfaction inspired Jenson to quit his job two weeks later in order to start his own business.

Jenson's old company is one of his clients today, and in a recent conversation, Jenson said that his ex-boss said that, if he had just given him the $100K he asked for, that Jenson would probably be president of his company today.

The moral of the story?

Recognize the value in your people – they're assets not expenses – and compensate them accordingly.

Read More: Why Employee Retention Is Important And How To Improve It

Jenson belongs to a professional employer organization, where he keeps in touch with other business leaders in his community, makes note of the salaries they pay their employees, and applies that information to improve employee retention in his own company.

As Jenson put it, "You don't pay people on time in grade, you pay them on cost of replacement. That's the key we need to see as business owners."

When you value your employees as assets, rather than expenses, and choose to invest in them, you'll inevitably reduce your employee turnover rate, eliminating one of the most expensive. 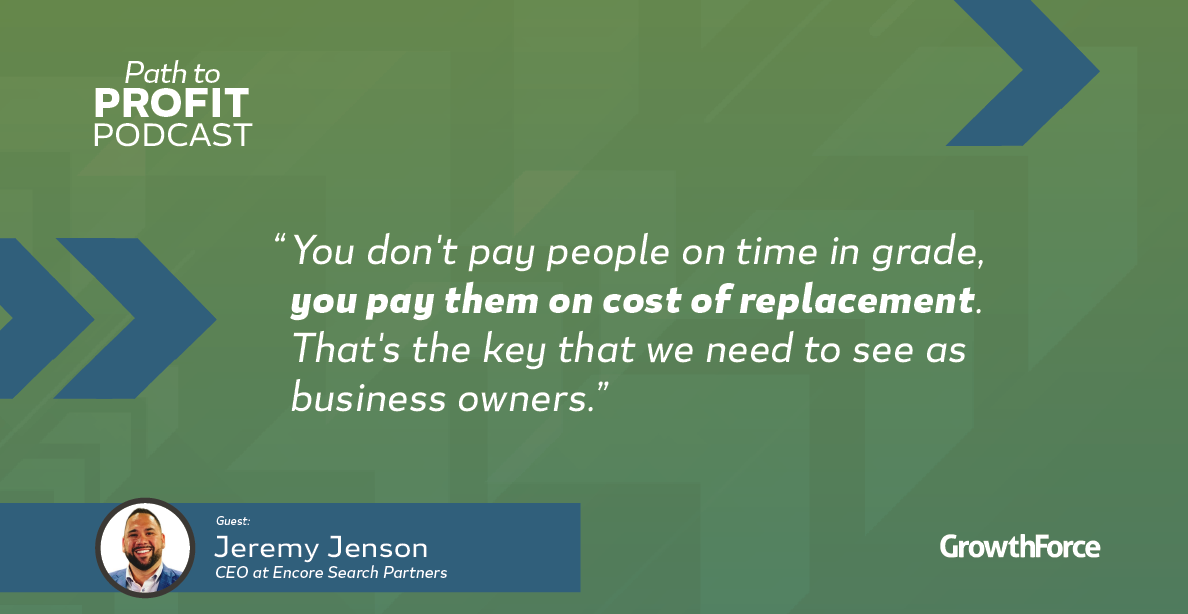 How do you get started? Getting the right Key Performance Indicators (KPIs) at your fingertips. Beyond turnover rates, identify and track additional human-capital-related metrics to measure the true impact that investing in your people has on your bottom line and your company's future.

Having a robust back-office makes this a lot easier- so you can spend less time number crunching, and more time making data-driven decisions.

The Riches Really Are in the Niches: Narrow Your Business Niche

How to Build a Successful Company Culture Committee