Is the U.S Headed Towards a Recession? 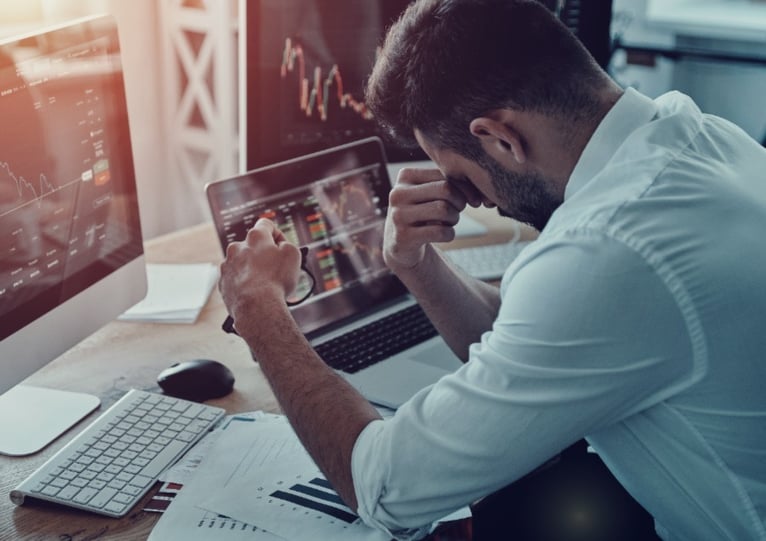 Following the economic struggles of the pandemic, most people had high hopes for the return of a strong economy by 2022.

This year, however, has only brought about more challenges and an increasingly gloomier outlook with decades-high inflation rates, an unprecedented cost of living, the war between Russia and Ukraine leading to increasing fuel costs, two consecutive federal interest rate hikes, and more.

As a result of all these concerns, many economists are predicting that the U.S. will be in an official recession by sometime in 2023 if not by the end of the year.

What Is a Recession?

One commonly accepted recession definition defines a recession as when a country's gross domestic product (GDP) shrinks for at least two consecutive quarters [1]. According to this definition, the U.S. has already been in a recession since the second quarter numbers were released showing that the GDP had contracted in both the first and second quarters of 2022.

So, Is the U.S. in an Economic Recession?

The GDP has contracted two quarters in a row. Why has no one officially declared the nation to be in the midst of an economic recession?

A more widely accepted definition of a recession is that of the National Bureau of Economic Research (NBER). This organization's definition is much more subjective and nuanced. The NBER defines a recession as, "a significant decline in economic activity that is spread across the economy and that lasts more than a few months." [2]

Read More: How to Survive When Inflation Is High: 5 Business Strategies for Inflation

According to this definition, the economic slowdown must be significant, widespread, and long-lasting. However, the committee also states that an extreme found in one of those three criteria can outweigh insignificant numbers in another category. For example, the COVID Recession of 2020 lasted just two months, but the economic impact was significant and widespread enough that the duration did not prevent the NBER from declaring the period of economic downturn a true recession.

Is a Recession in the U.S. Inevitable?

A yield curve inversion is an economic phenomenon that occurs when the yields on 2-year U.S. Treasury notes exceed the yields on 10-year U.S. Treasury notes. Historically, this phenomenon has been a strong indicator of an impending economic recession. In fact, the U.S. has experienced a recession within 18 months, two-thirds of the time the yield curve has inverted. An inversion happened in early July, and the current inversion is the most extreme we've seen since 2007, the year before the start of the Great Recession [4].

Read More: How to Prepare Your Company for Ongoing Change

In addition to concerns about the yield curve inversion, Americans are worried about an economic recession largely due to ongoing supply chain issues that have been fueling rising inflation rates. Plus, although the Federal Reserve's interest rate hikes are meant to slow inflation, they also make it more expensive for businesses and consumers alike to borrow money. This slows demand, but it also slows spending, and we're slowing spending at a time when many businesses are still recovering from the pandemic and find themselves in precarious financial situations.

So, the increased cost of doing business and potentially decreased consumer demand spell trouble for business growth, revenue, and the job security of American workers everywhere.

Is There a More Optimistic Outlook on the U.S. Economy?

Despite all of these warning signs, Federal Reserve Chair Jerome Powell stated in July that he did not believe the United States was in a recession [5]. In the argument against an impending recession, many economists are sighting the better-than-expected jobs report which is seen by many as an indication of an economy that is healthier than it appears.

In June, U.S. businesses added 372,000 new jobs – 112,000 more than expected – and maintained the 3.6% unemployment rate [6]. Those who caution against using the "R" word too soon, cite healthy employment numbers as clear evidence that the U.S. economy is still healthy because another symptom of a recession is massive job loss and widespread unemployment.

One tip to prep your business for a recession? Outsource non-core competencies.

Considering outsourcing? This guide has answers.

Download The Guide To Outsourcing to see the pros & cons of outsourcing, see if your business is ready to outsource, and how to choose the right partner.

If It Happens, How Bad Could a Recession Be?

Economists are primarily forecasting mild or moderate severity for any potential, upcoming economic recession. Of course, no matter how mild, any recession means that thousands of Americans stand to lose their jobs and financial security.

The forecasting duration of this potential, upcoming recession is much murkier. Economists are not clear regarding how the Federal Reserve might intervene to alleviate a potential recession.

Read More: How to Adapt Your Business's Pricing for Inflation

Currently, they have now raised interest rates two quarters in a row in an attempt to stymie inflation. With this type of activity occurring and inflation still at decades-high rates, many economists worry that if the nation does plummet into recession, the Federal Reserve will have its hands tied in terms of relief. Any form of economic relief efforts (such as the bailouts that occurred during the Great Recession) could, in turn, result in even higher inflation rates [7].

As a result, many believe we are at risk of becoming stuck in a period of stagflation with high inflation, high unemployment, and very slow economic growth (if any) [8].

Business Leadership: What You Can Do Now to Prepare Your Business for the Worst

During challenging times, business leadership skills become increasingly important in separating your business from those that won't survive the next recession and ensuring you remain successful. Despite the low unemployment rates and positive job numbers, the warning signs of economic recession are there, and savvy business leaders will heed them well.

Take steps now to begin shoring up your business, focusing on your strongest revenue streams (i.e. strongest profit margins), cutting excess costs, and leaning up your operations so that you have plenty of breathing room if times should get tough. When it comes to dealing with a recession, foresight and preparation are absolutely essential. Successful business owners never sit around, waiting for a tragedy to happen before taking action. Instead, successful business owners pay attention to early warning signs and take early action to prevent their companies from struggling and potentially failing.

How Do You Calculate Business Service Revenue?

10 Best Practices to Strengthen Your Business's Finances This Year

Why Your Nonprofit Should Be Conducting Risk Assessments